Dr. Nishant Kumar, Eyebetes Foundation and the District Collectorate of Thane under the guidance of Thane Collector, Mahendra Kalyankar on Sunday (November12) organised a large screening and awareness program for diabetes and blindness at the Town Hall in Thane on Sunday.

Diabetes is one of the leading causes of blindness across the world and is the most common cause of blindness between the ages of 40 to 60. This age group is when people are most active and have just started working, have started a family and are on their way to building their nest-egg for their economic future. If at this stage of life one gets blind or loses vision it is a calamity not only for the individual but also for his family who is dependent on him and this also has a wide reaching implications for society and the state.

In India, there is no formal state sponsored or private screening process for diabetic changes in the eyes and it is therefore up to the individual diabetic to have their eyes checked to ensure that there are no changes of diabetes. The need for screening and early detection of disease is particularly important because if caught early changes of diabetes in the eyes can be treated and there is no reason a diabetic should lose vision. 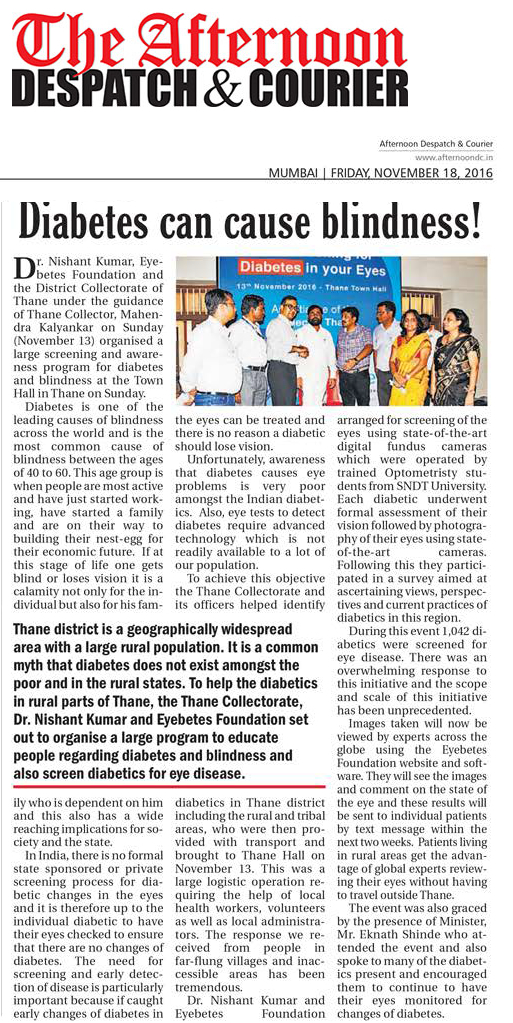 Unfortunately, awareness that diabetes causes eye problems is very poor amongst the Indian diabetics. Also, eye tests to detect diabetes require advanced technology which is not readily available to a lot of our population.

To achieve this objective the Thane Collectorate and its officers helped identify diabetics in Thane district including the rural and tribal areas, who were then provided with transport and brought to Thane Hall on November 13. This was a large logistic operation requiring the help of local health workers, volunteers as well as local administrators. The response we received from people in far-flung villages and inaccessible areas has been tremendous.

Dr. Nishant Kumar and Eyebetes Foundation arranged for screening of the eyes using state-of-the-art digital fundus cameras which were operated by trained Optometristy students from SNDT University. Each diabetic underwent formal assessment of their vision followed by photography of their eyes using state-of-the-art cameras. Following this they participated in a survey aimed at ascertaining views, perspectives and current practices of diabetics in this region.

During this event 1,042 diabetics were screened for eye disease. There was an overwhelming response to this initiative and the scope and scale of this initiative has been unprecedented.

Images taken will now be viewed by experts across the globe using the Eyebetes Foundation website and software. They will see the images and comment on the state of the eye and these results will be sent to individual patients by text message within the next two weeks. Patients living in rural areas get the advantage of global experts reviewing their eyes without having to travel outside Thane.

The event was also graced by the presence of Minister, Mr. Eknath Shinde who attended the event and also spoke to many of the diabetics present and encouraged them to continue to have their eyes monitored for changes of diabetes.

Thane district is a geographically widespread area with a large rural population. It is a common myth that diabetes does not exist amongst the poor and in the rural states. To help the diabetics in rural parts of Thane, the Thane Collectorate, Dr. Nishant Kumar and Eyebetes Foundation set out to organise a large program to educate people regarding diabetes and blindness and also screen diabetics for eye disease.